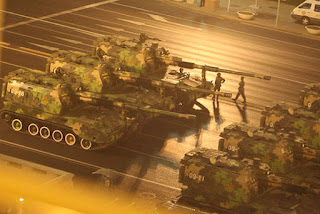 Chinese citizens understand their government is not as stable as it claims.

Rumors of a coup in Beijing ricocheted around the Chinese Internet on Tuesday and even caused the cost of credit default swaps on Chinese debt to rise slightly. That's remarkable considering there wasn't one iota of evidence that shots were fired at the Diaoyutai State Guest House or tanks were taking to the streets, as viral microblog posts had it.
But then consider that a month ago, Wang Lijun, an official of vice ministerial rank, sought asylum in the U.S. Consulate in Chengdu. Last week, his boss Bo Xilai, the popular party secretary of Chongqing, was dismissed from his post six months before a national leadership transition. In these strange days, it's easy to see why Chinese citizens may believe reports of a coup.
China is supposed to have "institutionalized" its leadership transitions so that such an upheaval could never happen. The outgoing Politburo Standing Committee hands over power to the anointed party general secretary and premier and picks the rest of the new Politburo. The Standing Committee also selects the two slightly younger men who will take over the top jobs 10 years down the road.
But is this arrangement really so stable? Power is now shared on an alternating basis by the Shanghai or "princeling" faction (former Party Secretary Jiang Zemin and the presumptive next one, Xi Jinping) and the Communist Youth League faction (current Party Secretary Hu Jintao). This sets up a dynamic of the current ruling faction sharing power with its presumptive successors in the other faction, a delicate balance to maintain over time.
And because paramount leader Deng Xiaoping picked Jiang Zemin and Hu Jintao, this year will mark the first transition not determined by the revolutionary generation. In 2002, Jiang Zemin tried to prolong his hold on power and pack the new Politburo with his proteges. No doubt Hu Jintao is trying to do the same.

The party has been able to keep internal strife under control by avoiding ideological struggle over the last 20 years. The factions have competed for important posts and the spoils of power, but they ruled by consensus. The public was simply told to believe in the myth of a monolithic party and ignore the men squabbling behind the curtain.
This technocratic pragmatism may now be breaking down. For instance, Bo Xilai appealed to leftists' disgust with bourgeois individualism and public unhappiness with income inequality, a tactic that alarmed some leaders. Since his dismissal, leftist websites and commentators have also been silenced.
But there are plenty of other voices on the "right" advocating liberal political reform. Ten years ago, the prospect of achieving middle-class incomes made most intellectuals unwilling to rock the boat. Now they feel secure enough to demand more rights. The party sees this as evidence of Western infiltration, and it is tightening control over the media and launching new campaigns to promote the spirit of self-sacrifice.
This return of ideology could make it difficult for the party to apportion power neatly between the factions. This time, Bo Xilai was replaced by Zhang Dejiang, a more moderate member of the same faction. But if the factions come to stand for policy platforms, they will naturally start to play for keeps. Instead of rotating through positions as they currently do, politicians and their proteges will develop personal strongholds, especially in the military. From there it's a short hop to a real coup attempt like the one Mao's designated successor Lin Biao was supposedly plotting in 1971, before he died in a mysterious plane crash.

The Western commentariat likes to praise Chinese leaders as more intelligent and decisive than those chosen by democratic elections. Sometimes that may be true. But when was the last time rumors of a coup in Washington or London moved markets? The endless chanting of the "protect stability" mantra by Communist Party functionaries is a reminder that the regime is constantly on guard against attempts by its own members to usurp power.